Any news about the time "gap" when change pedalboards?

Hi Team!! I know that we had discuss this inside other topics, but if it´s possible, I really wanna know if the team has some news about it.

Unfortunately, in my last reharsals, I´v been having a lot of problems with it.

Te “mute” time when I change a pedalboard is REALLY large, and to play live, it´s unacceptable (sorry about the term) !!

And I´v been using REALLY “light” pedalboards, and the time between changes is too large.
In some cases, I know that I could only turn on/off some effects in the same pedalboard (and I do that), but sometimes you need a complete scenario change.

I was curious about how long it takes for your pedalboard switchs.

I’m waiting for mine to arrive and I’m interested in hearing about this from other people’s experiences.

The MOD is REALLY a great equipament. With an unquestionable hardware quality
and, all of us knew, that is in constant development of the softwares and plugins.

This issue, of the mentioned “gap”, has´s been discussed to find the best solutions.
Unfortunately, at this moment, this issue turns to very complicated to use it in live performances or reharsals (when sometimes you need to change an entire pedalboard). Even when you load a very simple pedalboard (ex. only chorus and gain plug ins), even if this plugins are “desativated” at the moment of load, the gap is unnaceptable !! And the worst thing is, this gap causes a mute moment !! If just take a long to apply the effect, it would be more acceptable, but it mutes all the chain.

Let´s wait for the team (and help, of course), to find a better solution for this gap.

And I guarantee you, the MOD is REALY AWSOME !!!

What others have been calling of “scenes” is in the works already.
Basically allows you to save the current state of parameters into a pedalboard preset.
You can map the preset list into a knob or footswitch.

We’re still doing tests regarding this though, so don’t want to report too much on something that is still in progress.
(also the name too, “pedalboard presets” can be confused with regular plugin presets. “scenes” is not so bad…)

(also the name too, “pedalboard presets” can be confused with regular plugin presets. “scenes” is not so bad…)

I agree that the delay is unacceptable. Like everyone else, I love the Mod Duo and find it very impressive, but in a live setting, I can only use it in an effects loop due to 2 reasons: 1) the delay between switching pedal boards, and 2) the lack of trails between switching. So basically I use my Mod Duo as an ambient pedal and as a tube screamer. What I do is plug it into the effects loop of my Kemper, and then turn the loop on and off as I need the effect. Unfortunately when I turn off the effect loop, the Mod just cuts out entirely, so going for an ambient tone to my usual sounds abrupt. Also, if I go from my ambient sound to a different pedalboard sound the gap is just too unreliable, so I’m forced to use my effect loop. Anyway, I would love to see this resolved, but I’m afraid it’s more of an issue of processing power more than a software update. Anyway, one can hope.

I figured out a solution! I used the new ToggleSwitch4 (utility) and assigned 2 sets of effects to the toggleswitch that I can easily bypass. I ran a stereo signal through the other 2 toggleswitch channels that are always on so that there was a constant dry signal going through. Then, I just assigned the footswitches to bypass each of the 2 effects. Now, I just leave my pedalboard on all the time and just bypass the effects as I need them.

btw, you can do other tricks with an analog A/B switch in front of the device into inputs 1 and 2 - you can do things like have an always-on distortion channel through input 2, and two other effects mapped to the toggles through input 1 and just have them both routed to output 1 (you could potentially even do tricks with another A/B switch and signal chain out to channel 2 but it’d be getting into some tricky management territory there).

the new stuff falk has added for plugins should enable trails in some plugins pretty soon - just gotta wait for support to catch up.

Here’s my pedalboard that solved the issues I was having. I opted for a pedal that allowed my original signal as always on, but then allowed me to activate a pad or a boost (or BOTH!) that I could toggle on and off that would retain the trail of the pad. Such a great solution! 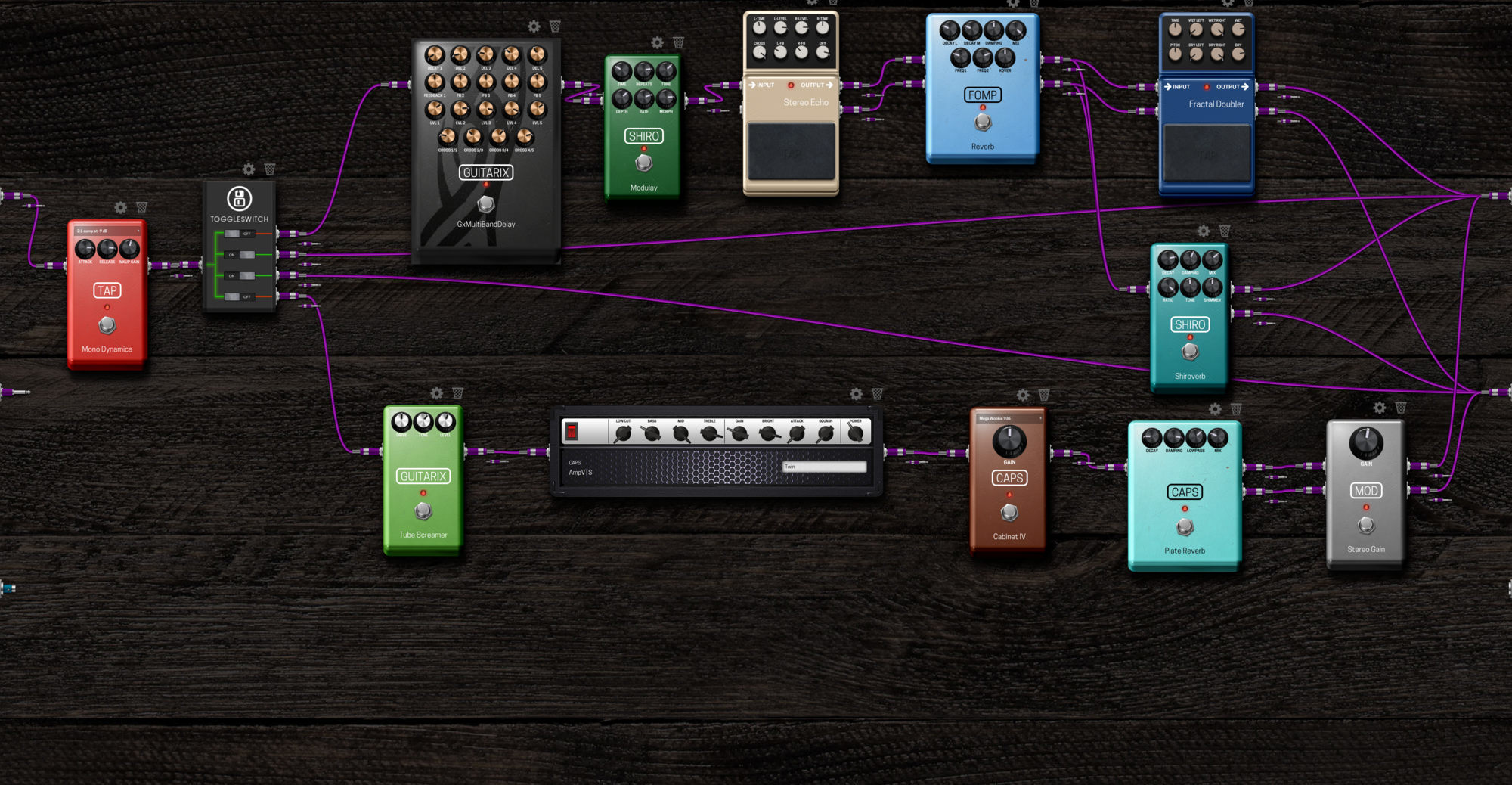 Everything a multi-layered guitarist needs in their arsenal: a succulent and smooth shimmer swell pad on one path, and a shrieking shrill boost on another path that cuts through the mix like a Japanese ginsu knife! The best part is that there's a...

In my implementation, I also noticed a “gap” between pedalboard changes.

Some steps I took to minimize these were:

Something I did not and I suggest, but I do not know if it’s computationally worth implementing:

Nice work on PluginsManager - I was literally just writing a part of an article about how community contributions could make the Duo something special. Lower-level / CLI tools for direct and programmatic access to the core functionality will be a nice complement to the shiny web interface.

I wonder if a flame graph would turn up anything about the delays https://github.com/uber/pyflame

Nonetheless, can’t hurt to look, maybe there is some low-hanging fruit there that will make it easy to speed up the switching.

omething I did not and I suggest, but I do not know if it’s computationally worth implementing:

IMHO probably not because for me at least, if the 2 pedalboards are fairly similar I’ll achieve the switch through pedalboard presets rather than a separate pedalboard. My pedalboards tend to all be very different.

Thanks! PluginsManager is part of my college monography (college course completion work) that I do.

@unbracketed I believe @ssj71 has answered you: PyFlames will detect problems in the code in python, not in the initialization of the audio plugins.

What this does not mean is that this tool is not useful: With it it is possible to detect other problems, something like (is an example) the feedback given to the web GUI delays the loading of the plugins. Things we do not notice in development can be clear with it.

Thank you for this commentary. Now I can argue with my supervisor of my college monograph.

IMHO probably not because for me at least, if the 2 pedalboards are fairly similar I’ll achieve the switch through pedalboard presets rather than a separate pedalboard. My pedalboards tend to all be very different.

I unfortunately do not own the Mod Duo. (But it’s on my wish list: D)
So I’m not sure if they use footswitches like next / before pedalboard.

If so, some strategies could be taken, such as:

¹ Has anyone ever noticed if initializing an audio plugin without being connected to other plugins can cause problems in the sound - xrun?

That makes a lot of sense, thank you for the clarification. Now that there are (stronger?) use cases for optimizing the init routines (fast chain switching), are there technical reasons why the pre-computed data can’t be cached to disk or packed into the source code? Is it (almost) always dependent on the input params?

You’re right, thanks. pyflame could be useful for very minor improvements or identifying overlooked pathological cases at the GUI level. Good old ptrace and friends can still be used for profiling the plugins, but even if they clearly show where the slowdowns are there might not be much to do about it because of author design decisions to sacrifice startup speed for runtime performance.

At the least, per plugin startup time could be useful to know as one more metric to consider when constucting

It looks like if you specify n-frames = 0 to lv2bm it will skip the run step entirely, so the run time measured should be mostly the init code. Does that sound right?

I do. But, to be honest, as well I put as much as possible in the initialization, moving as much stuff as possible out of run, just, that didn’t mean that I waste resources, or ain’t be careful with what my plugs do in init.

And I believe, most developers do so as well.

However, some of you here may know that guitarix provide smooth, gab free preset switching, and we archive that by taking all possibility’s into account. That means, we init “all” plugs on application startup, already loaded plugs will be reused. Also, guitarix is a multi-plugin host, so no jack call to register new clients is needed when change a preset (here pedalboard). That mean, changing a pedalboard in guitarix isn’t more then provide a new list of pointers to plugins.

I guess that isn’t possible for the MOD, but, maybe a new function were users could select/mark pedalboards for live use, so that the plugs which are supposed to be used for a live gig, could be pre-init/load may be of some use.
I know, it will be nearly the same as using a switchbox, just, it will allow a better organization on screen.

I see some nice ideas here.
I can add a few of my own too.

preloading is also an option, to some extent.
loading the next pedalboard plugins while the current one is live has been discussed before, but sounds like a dangerous thing (will need to load things while sound is processing, which can make things even slower, not faster…)
perhaps preloading the meta-data can work, will have to do some tests later on.

optimizing the code is always an option too, of course