I have recently had some Arduino shield PCBs fabb’ed and ordered the parts for them. I ordered enough for 5 and I am going to keep two for myself so I will have a few left over that I would be interested in selling as DIY kits (solder them up yourself) or can assemble them for someone. Limited quantity available (well…exactly three) so if there is interest let me know and I can figure out what it might cost. Not looking to make money - just cover my costs.

are these essentially a replica of only the PCB portion of the shield sold by MOD here?:

Create your own controllers with MOD Arduino Shield

Make it, hack it, do it again. With little effort, anyone can assemble sensors and other electronics and build controllers for your MOD.

…is there some advantage to your PCB over the one from MOD (other than cost)?

No - it is identical. Actually, I didn’t even realize they sold them on their website - I assumed it was a hobby-ist thing. With the cost of the parts and shipping, it’ll probably be about the same (except my PCBs are black).

I am cool to not sell my extra pieces if that offends anyone. I only undertook this as a hobby project. Probably would have been easier to just buy them online!

oh, no offense at all… didn’t mean to imply that!

it’s totally great that folks are developing things around the MOD on their own!

but was just thinking, as you, that by the time i source parts and do the build, it’s not really worth it vs. buying the one from MOD.

Yeah, I guess it is a wash. I intend to build my own custom footswitch as a project. Can’t wait to assemble these and get coding!

nice! i’ve been thinking about various controllers for a while now… just been too busy to get into implementation, but the the shield i do have is sitting over there on my workbench, beckoning!..

I would be very interested to some code, and things you are doing, to get inspired !

Arduino is very powerful. I work with them often at my company. We use them for scientific equipment, manufacturing, etc.
For inspiration, take a look at all the sensors that are available. There’s a lot of other cool stuff too. For instance, not long ago I saw RGB lit rotary encoders, which work with i2c (the two-wire bus format).
My plan is to eventually make an 8 encoder panel to control the DUO, plus other things, like Bitwig. For the DUO it would be perfect for dialing in tones. I could use the center-press buttons on the encoders too. It’d be sweet; I don’t quite have the time lately. Though, it’d be a fun project for anyone really.

nice… i’ve been looking into i2c, and also some multichannel A/D converters to increase the number of possible encoders on one arduino uno.

i2c is great. I know I’ve seen multichannel A/D that work over i2c.
Btw, here’s the RGB lit, i2c encoder I mentioned: https://www.tindie.com/products/saimon/i2cencoder-v21-connect-rotary-encoder-on-i2c-bus/
They’re costly, but it could be a killer addition for a controller project where visual feedback is desired, as the RGB diode is addressable as well. In fact, there’s a bunch of awesome features about it, including it’s own MCU, GPIO and EEPROM … powerful.

Well, first hurdle complete! The board is soldered up and working. It took some balls to just plug it into my DuoX but…it works! At least the power routing and LED. I’m not using an Arduino so it’ll take me some coding to integrate the control chain driver and test that part of it out. Maybe over the holidays. 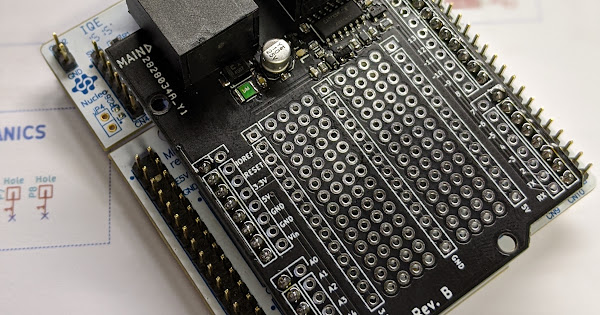 Hey Guys! So I have made some progress… Long story, but I decided from the start I wanted to build my project using micropython. Initially I tried to integrate the control chain C library (which is really well written, BTW!) directly and access it from Python. I had this working with a custom build of micropython to properly integrate it, but after struggling (with micropython) trying to break it out into a separate loadable module I decided to just port the whole thing to pure micropython. The result (so far, as it is not complete) is available on Github.

But after a few late nights, handshaking is working and it shows up in the UI! Now to get assignments and updates working!

For now this is running on an STM32 development board, but eventually this could easily be run on any of the many Adafruit boards that support micropython with an appropriate shield to add the RS485 circuitry and ethernet jacks.

I’ll keep you posted on my progress.

Beautiful; congrats on your achievement! I work with Python, too and this certainly lowers the threshold for trying to work with the hardware. Cheers!